How I have tweaked my Minecraft client to be 'just right'

Pushing the boundaries of a vanilla game, while being able to play on un-modified servers

Starting out at the base game. I like to keep this fairly up-to-date. Right now, my base game is version 1.16.4. Along with the base game, my game launcher of choice, MultiMC, allows using a custom LWJGL version. I choose to use version 3.2.2, as it is the most stable for me.

Anyone who has played Minecraft for long enough will remember back when installing a mod involved opening up the game JAR, and dropping new class files into it. Mod loaders essentially still do this, but they provide a much cleaner system for you, the user. For years, I used the Forge Mod Loader, but recently switched to the Fabric Mod Loader, as, in my opinion, the FabricMC documentation is much nicer to deal with.

Unlike Forge, Fabric generally requires a helper mod to be installed called the Fabric API. This exists to provide user-friendly mappings to Minecraft code for mod developers.

One of my least favorite parts of playing on multiple multiplayer servers is the need to constantly switch Minecraft versions to accommodate every server version I am playing on. For example, the server I talk about in my post about Minecraft chat over IRC is running version 1.16.3. You may have played on some high-end servers like Hypixel or MCCTF, where you can connect with any client version you want. These servers are both running Network Protocol Translation plugins that will convert between Minecraft server protocol versions as packets are sent and received.

This can also be set up on the client instead of the server, allowing a single client to connect to multiple server versions. I run both the Viaversion and Multiconnect mods, which together allow my 1.16.4 client to play on servers all the way down to 1.8.0.

On the rendering side of the game, I run a few specialized mods to improve or replace various functions of Minectaft's built-in game renderer. Starting with the largest change, I use the Sodium renderer, which includes a large number of rendering improvements, and opens up some extra customizability to the user. 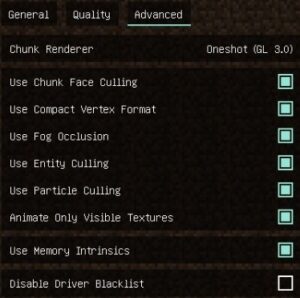 Speaking of lighting, I also run Lamb Dynamic Lights, which allows you to illuminate the area around you when holding a torch (very helpful for mining). Anyone who remembers the old Not Enough Items mod, will remember that pressing F7 would bring up an overlay for viewing the light level of any block. I now use the Light Overlay mod to do the same thing.

In terms of "nice to have" rendering features, I have OKZoomer to give me Optifine-style camera zoom. I don't use Optifine anymore, but am a donator, so, to get my donator cape back on my client, I have the Minecraft Capes mod installed. Continuing to add small features to the game from Optifine, I use Connected Glass to add connected textures, Diagonal Panes to render glass panes and iron bars on diagonal angles, and Lambda Better Grass to connect grass textures together. For no particular reason, I also use Better Dropped Items to render dropped items better.

Finally, a nice rendering mod to have is Dynamic FPS, which essentially stops game rendering when window focus is lost. This just improves your computer's performance when running Minecraft in the background.

Not many people know that mods exist to replace or improve Minecraft's audio engine. I quite enjoy using these mods, as the game becomes significantly more immersive. I use the Dynamic Sound Filters mod to add reverb to caves and the nether (the nether becomes quite scary when game sounds are turned up). Along with Dynamic Sound Filters, I also use a fairly ridiculous mod called Presence Footsteps. Presence Footsteps is a mod that detects the block each of your feet is standing on, and plays the appropriate sound. This means that walking on the line between two different blocks will play the block steps sounds alternating with each other. This mod also works with 4 legged mobs like horses, and even 8 legged mods.

I have a lot of UI tweak mods installed to provide me with the "perfect" game HUD.

Starting with hotbar modifications, I use AppleSkin to show the nutritional value of whatever food item I am holding, and Giselbaer's Durability Viewer to show me the durability percentage of my armor, and handheld items.

In my inventory, I use Roughly Enough Items to provide crafting recipe lookup, a list of every item in the game, usages for items, and more. I also use Roughly Enough Resources as a plugin for Roughly Enough Items to provide extra information about mob loot and item / ore rarity in the world. When dealing with shulker boxes, it is annoying to constantly be placing them down to check their contents. For this, I use the Shulker Box Tooltip mod to show a box's contents when I hover over it, and the Shulker Box GUIs resource pack to color-code the shulker box GUI. Despite "requiring Optifine", this pack does not actually require Optifine to work. 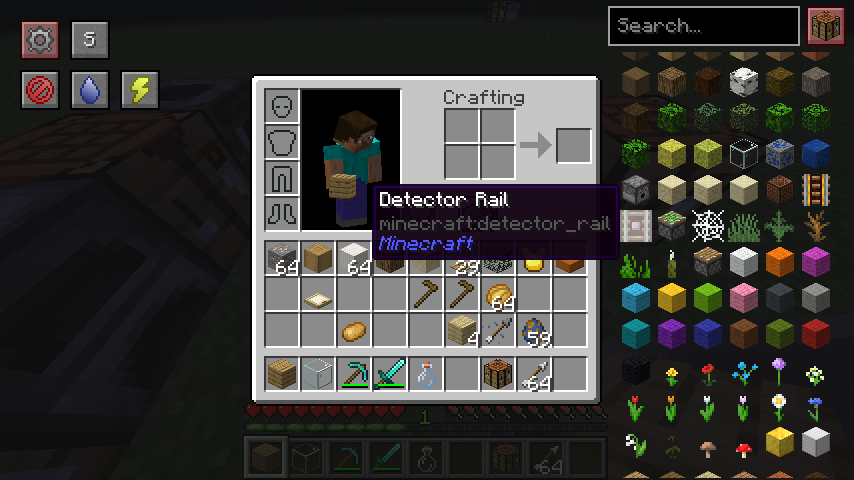 In terms of HUD "extras", I use Here's What You're Looking At to show basic information about the block I am looking at. This is very helpful for me, as I am still learning what all the new 1.9+ blocks are. I also extend HWYLA with Hwyla Addon Horse Info to show me the stats of any horse I look at, and cAn i MiNe thIS bLOCk? to tell me the needed tool to harvest a specific block. I also use Game Info to tell me the world time in the upper left of my screen.

In the world, I use Orderly to show the health of mobs above their heads, and Name Pain, which will give player's names a red tint when they are low on health.

There are a few small mods that I have installed to provide some nice-to-have information in game, like Chat Heads, which shows a player's face beside their chat messages, AuthMe, which allows you to switch accounts without restarting the game, Anti-Ghost, which fixes Minecraft's ghost block problem, BetterF3, which improves the game's F3 screen, Controlling, which allows you to search through the game's keybinds in an easier way, Craft Presence, which provides highly-customizable Discord Rich Presence data, Custom Selection Box, which makes the block you are looking at more distinct, Mod Menu, which is used by many mods to provide settings screens, Not Enough Crashes, which just brings you back to the title screen if something stops working, instead of closing the game, and Path Suggestion, which improves Minecraft command auto-complete.

I hate writing down coordinates of various things, so I use Xaero's Minimap and World Map mods. These both provide in-world waypoints, and generate a map of everywhere you travel in the world. 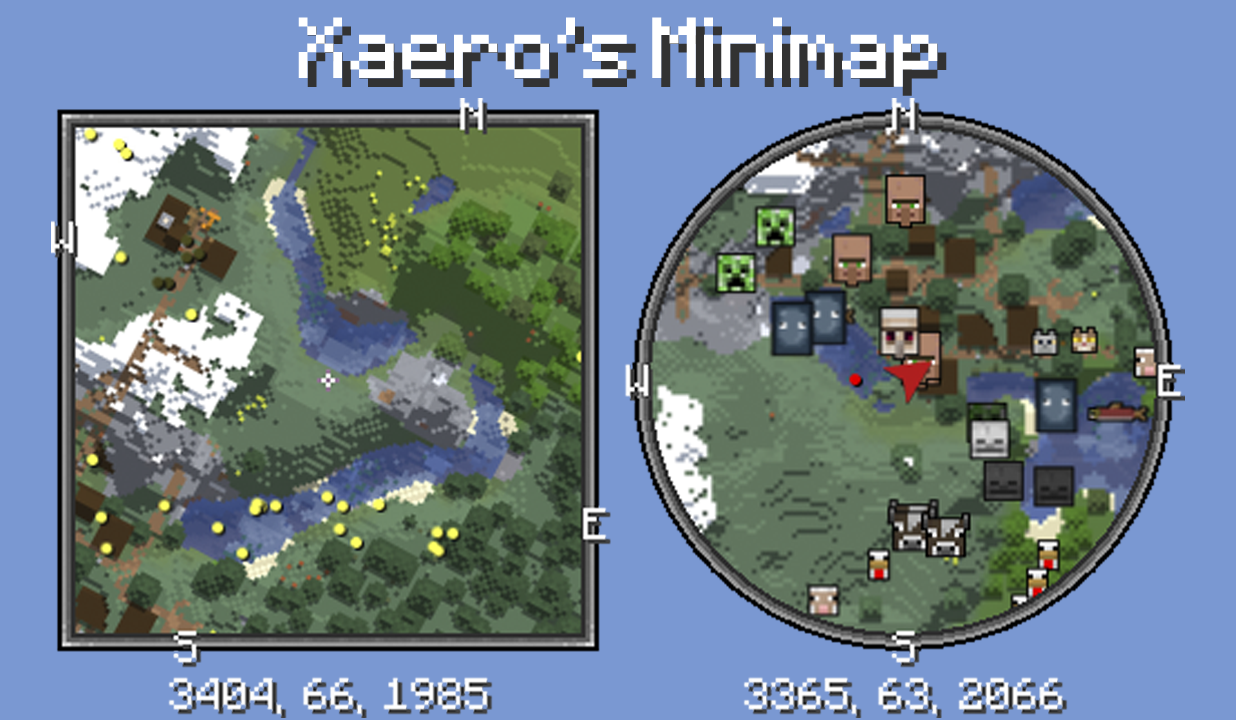 I spend a lot of time programmatically editing and copying builds around between worlds and servers. I do this to make redstone templates, generate build platforms, and create Minecraft-based voxel art over on my Instagram page.

To do this, I use WorldEdit for most of the heavy lifting, Euclid to show me my WorldEdit selections as I create them, and Litematica to copy builds from servers to singleplayer worlds (since WorldEdit only works in singleplayer).

Finally, I use Terrestria, Traverse, Cinderscapes and Overworld Two to improve terrain generation, and "spice up" my worlds.

NOTE: The first three of these mods introduce new blocks to the game, but do not cause issues in vanilla multiplayer games.